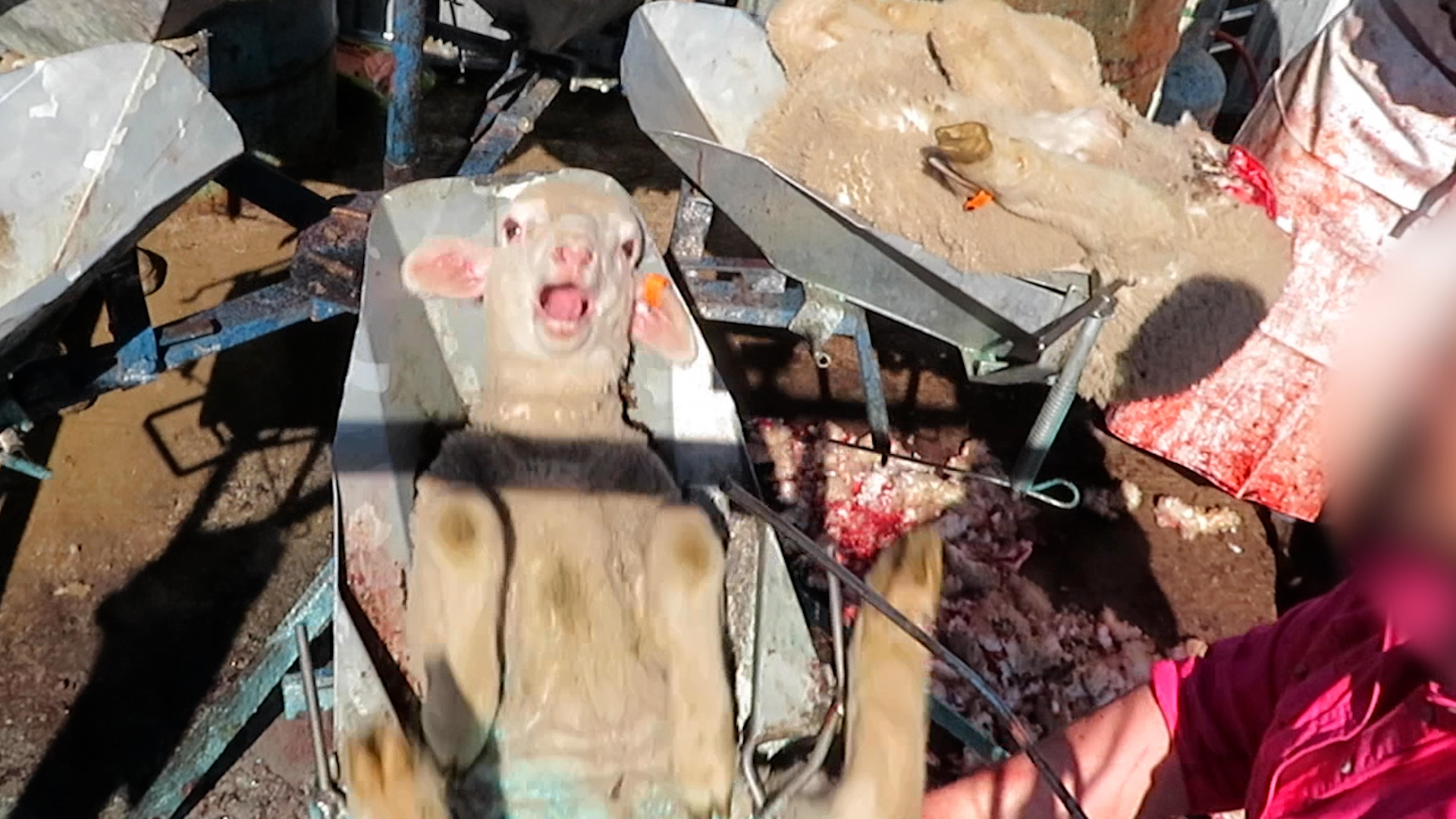 Does producing wool hurt sheep? Just considering the practice of mulesing alone, the answer is a very obvious yes.

Mulesing is the practice of cutting chunks of flesh from lambs’ hindquarters with shears to address problems caused by breeding them to produce excessive amounts of wool.

Merinos have been bred to have wrinkles – meaning more wool per sheep – and because of this, urine and faeces often collect in the folds of skin around their hindquarters. This attracts flies, who lay eggs and hatch maggots. They begin to eat the sheep alive. This is what the industry calls “flystrike”, and it’s as awful for sheep as it sounds.

The theory behind mulesing is that the gashes will heal as smoother, unwrinkled skin that won’t collect moisture, therefore preventing flystrike.

The video below was recorded in 2018 on a sheep property in Australia. Lambs are prey animals who normally suffer in silence, rather than drawing attention to themselves and attracting further harm, but these animals were treated so badly that they cried out in agony and fear.

Workers then dropped the lambs to the ground or onto a blood-spattered mat, where many landed hard on their bloody wounds.

The pain caused by mulesing can last up to three days. It’s so intense that lambs can go into a state of shock, become sick, and lose weight – and some even die.

Researchers have noted elevated cortisol levels and behavioural indicators of pain after mulesing, such as a lowered head with the nose almost touching the ground, sudden bolting, and an unusually stiff walk.

Sheep are remarkably good at recognising human faces, and lambs may actively avoid the person who mulesed them for up to five weeks.

In recent years, farmers have more frequently provided lambs with pain relief such as Tri-Solfen, a topical anaesthetic and antiseptic gel spray for use after mulesing. Since this is applied after the lamb’s flesh has already been painfully cut, it’s hardly a solution to the suffering caused by the practice.

Most of the world had no idea what mulesing was until Ingrid Newkirk, the founder of PETA, visited Australia in 2005 and was invited to a sheep farm to witness the procedure, escorted by a television crew from 60 Minutes.

After seeing the cruelty of mulesing, fabric buyers and fashion brands vowed not to purchase Australian wool, which caused the lobby group Australian Wool Innovation (AWI) to begin legal proceedings to “wear PETA into the ground financially”.

The tactic didn’t work, and a settlement was reached in which the wool industry promised to phase out mulesing by 2010.

Now, more than a decade past the deadline, at least 74% of Australian wool still comes from mulesed sheep.

During a New South Wales parliamentary inquiry in 2020 with a proposal to ban mulesing, wool-industry stakeholders claimed that introducing a ban in January 2022 would “not provide enough time” to phase it out.

Fashion’s Move Away From Mulesing

There are now 185 fashion brands, including HUGO BOSS, H&M, Country Road Group, Kmart Group, and Patagonia, that have banned or plan to ban mulesed wool.

However, Australia remains the world’s largest wool producer, accounting for 90% of the world’s fine apparel wool and 60% of its apparel wool. Since most farmers there are still practicing mulesing, the numbers just don’t add up.

According to AWI, Australia produced around 300,000,000 kilograms of greasy wool in the 2018–19 financial year. Of that, 30,732,306 kilograms came from sheep who were not mulesed. That means only 10.2% of wool on the market can be sold to the large and growing list of retailers that want to declare that they source only non-mulesed wool.

The fashion industry is trying to develop a traceability system called the Responsible Wool Standard to source non-mulesed wool but has noted the “little quantity available and no workable prices” as well as “quality concerns due to change of source origin”.

While mulesing is probably the most well known of the mutilations inflicted on lambs used for wool, it certainly isn’t the only one.

Tail-docking is par for the course on commercial wool operations worldwide and involves cutting through the tail bone of a lamb with a hot knife or placing a rubber band around the tail to cut off circulation to the area so that it withers and falls off.

Male lambs are castrated, their scrotums slashed open and their testes pulled out and cut off. Some farmers instead tie a tight rubber ring around their scrotums so their testicles will lose blood flow and fall off.

The horns of some are removed from their skull using a knife, wires, a saw, or shears or via disbudding – a process of burning a lambs’ budding horns to prevent growth – with a hot iron.

All these torturous procedures are usually done without pain relief. They’re designed to make sheep easier to handle for farmers, reducing future care, and therefore costs, for individual animals being kept in flocks with thousands of others.