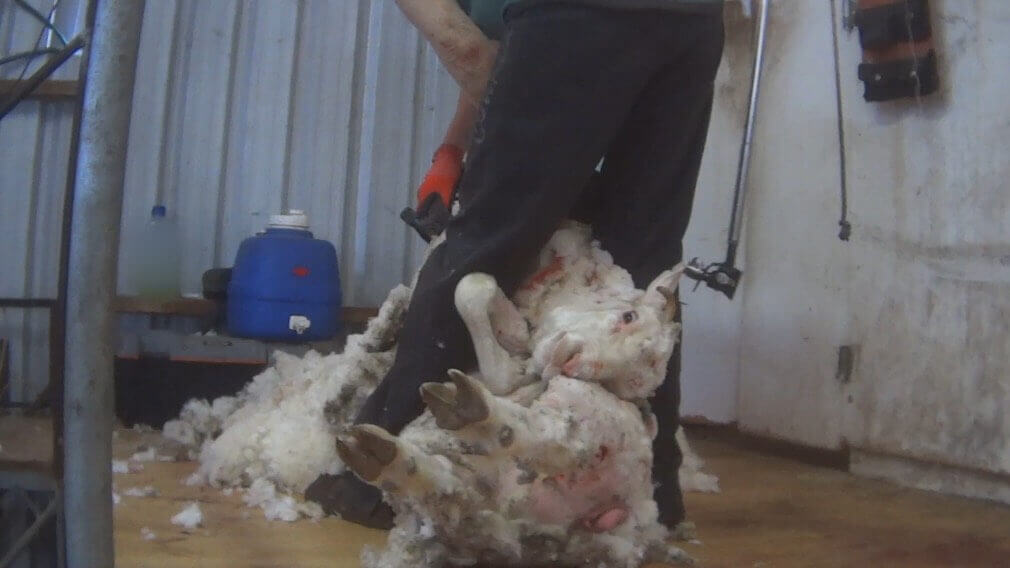 Thanks to successful marketing, many people imagine that shearing is a necessity for good animal welfare and that the resulting wool is a useful by-product. But shearing is not an altruistic act. It’s a business born out of genetic manipulation that puts the welfare of animals second to the money that can be made off their backs.

Sheep only need to be shorn because of selective breeding by humans that causes them to carry an overburden of wool. Their ancestors did not need any human intervention to survive.

Shearing requires sheep to be handled multiple times – during mustering, yarding, and penning – all of which is stressful to them.

They’re deprived of food and water  before being shorn, in part so they’ll feel weak and put up minimal resistance. As one shearer explained, “Imagine if someone attacked you after … you’d been starved for 24 hours – you wouldn’t have much of a fight.”

As prey animals, sheep are terrified of being pinned down for shearing. This natural fear can make them extremely uncompliant during the shearing process and frustrates shearers, who often force them into obedience through violence.

In 2014, PETA US released a video investigation revealing extreme cruelty to sheep in Australian shearing sheds. Workers punched sheep with closed fists and electric clippers, knelt on their necks with their full weight, and slammed them into the floor. Sheep were left with bloody, gaping wounds after shearing, which were crudely sewn up without any pain relief.

Six shearers pleaded guilty to cruelty to animals in court, and the industry called the investigation a “wake-up call” that had forever changed it.

Since then, PETA’s entities have exposed cruelty at 117 farms in six countries: England, Scotland, Chile, Argentina, the US, and of course, Australia. But nothing has changed.

A 2020 investigation – once again in Australia – showed that shearers kicked sheep in the abdomen and back, punched them in the face, and stood on the neck of a sheep as she flailed in fear. Workers talked about other shearers who had broken a lamb’s leg, cut up sheep, and gouged them in the eyes. A shearer still employed by the crew allegedly bit a sheep’s ear off in anger.

In shearing sheds, workers race against the clock because they’re paid by volume, not by the hour, encouraging rushed and rough shearing.

“[T]he shearing shed must be one of the worst places in the world for cruelty to animals … I have seen shearers punch sheep with their shears or their fists until the sheep’s nose bled. I have seen sheep with half their faces shorn off …”